Bergamo
Bergamo is a real masterpiece of history, culture, music and landscape, with a medieval heart on top of a hill surrounded by the majestic Venetian Walls an UNESCO World Heritage Site.

Come explore it by walking across its historic districts, its churches, its funiculars and its walkways climbing up through the lush vegetation of the Hills Park and let yourself be enchanted by the surprising views of the flatland and the mountains.

Bergamo is the birthplace of Donizetti, one of the world’s five greatest opera composers: you can trace the life of this XIX Century musician starting from his native house in Upper Bergamo, admiring his mementos at the Museo Donizettiano, at his grave in the Santa Maria Maggiore Basilica and at the city theatre, which was named after him: every season Donizetti’s greatest successes are performed and praised right here.

From music to art masterpieces, such as Botticelli’s, Mantegna’s, Bellini’s and Raphael’s: you can find these masters here in the halls of Accademia Carrara Picture Gallery, housing one of Europe’s most outstanding collections of the Italian Renaissance.

You can discover the amazing works by Moroni, the XVI Century genius of portrait from Bergamo, whose pieces are exhibited in the world’s major museums, along with the masterpieces by Lorenzo Lotto, who gave Bergamo some precious works of art, altarpieces and wooden inlays with mysterious subjects.

On the other side, the core of Lower Bergamo is the highest expression of XX and XXI Centuries, from the GAMeC – the Gallery of Modern and Contemporary Art – to the Sentierone promenade, the most popular place for Bergamo’s citizens to go to take a stroll, built where the old Exhibition Ground used to be: here you can find some beautiful buildings dating back to the last Century and created by today’s most renowned architects.

Surrounded by historical boroughs, the city centre is the best place to go shopping and have some fun, enjoying a coffee and taking a break before deciding what to do among festivals, cultural events, concerts and shows. Bergamo is a dynamic and bustling city even in the evening: come enjoy an “aperitivo” before having dinner in one of its best restaurants and try a “casoncelli” pasta dish, the most famous local food.

9 PDO cheeses, cold cuts, excellent wines and traditional recipes: these are a few examples from the rich gastronomic offer of Bergamo and its territory. Go explore the food, the culture and the nature of the province, where rivers, valleys, flatland and mountains create the perfect background for the Upper Town’s unique skyline.

Upper Bergamo
The challenge to build a magic citadel that would be suspended between the sky and the earth, like a dream, was won only once in the whole of Italy. It was, and is, in Lombardy, in Upper Bergamo.
CONTINUE
Lower Bergamo
The quite ancient village streets meet the modern dynamism of Bergamo Bassa. Town to be lived, moderness to be crossed and charm to be discovered through monuments, museums, coffee bars and...
CONTINUE
The boroughs
Apart from the remarkable architecture that divides Bergamo into the Upper City and the Lower City, the picturesque neighbourhoods best represent the historical and cultural heart with all the...
CONTINUE
Parco dei Colli
Did you know that Bergamo is the only city enclosed within a park?
CONTINUE
10 minutes away
The Great Bergamo – “La Grande Bergamo” consists of 34 villages surrounding the city, whose boundaries are often quite blurred. They all look very different from one another, but...
CONTINUE
Terre del Vescovado
CONTINUE
SEE ALL PROPOSALS 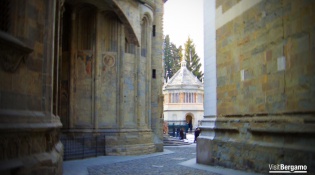 This route runs through the heart of the city inside the Venetian...
PERCORSI
Add to MYVISIT 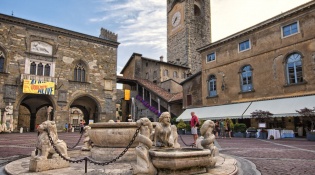 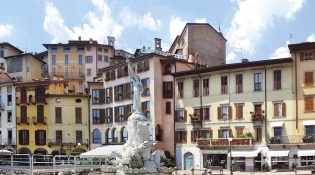 It overlooks an enchanted lake, it’s surrounded by pure nature and it...
HISTORIC TOWNS
Add to MYVISIT